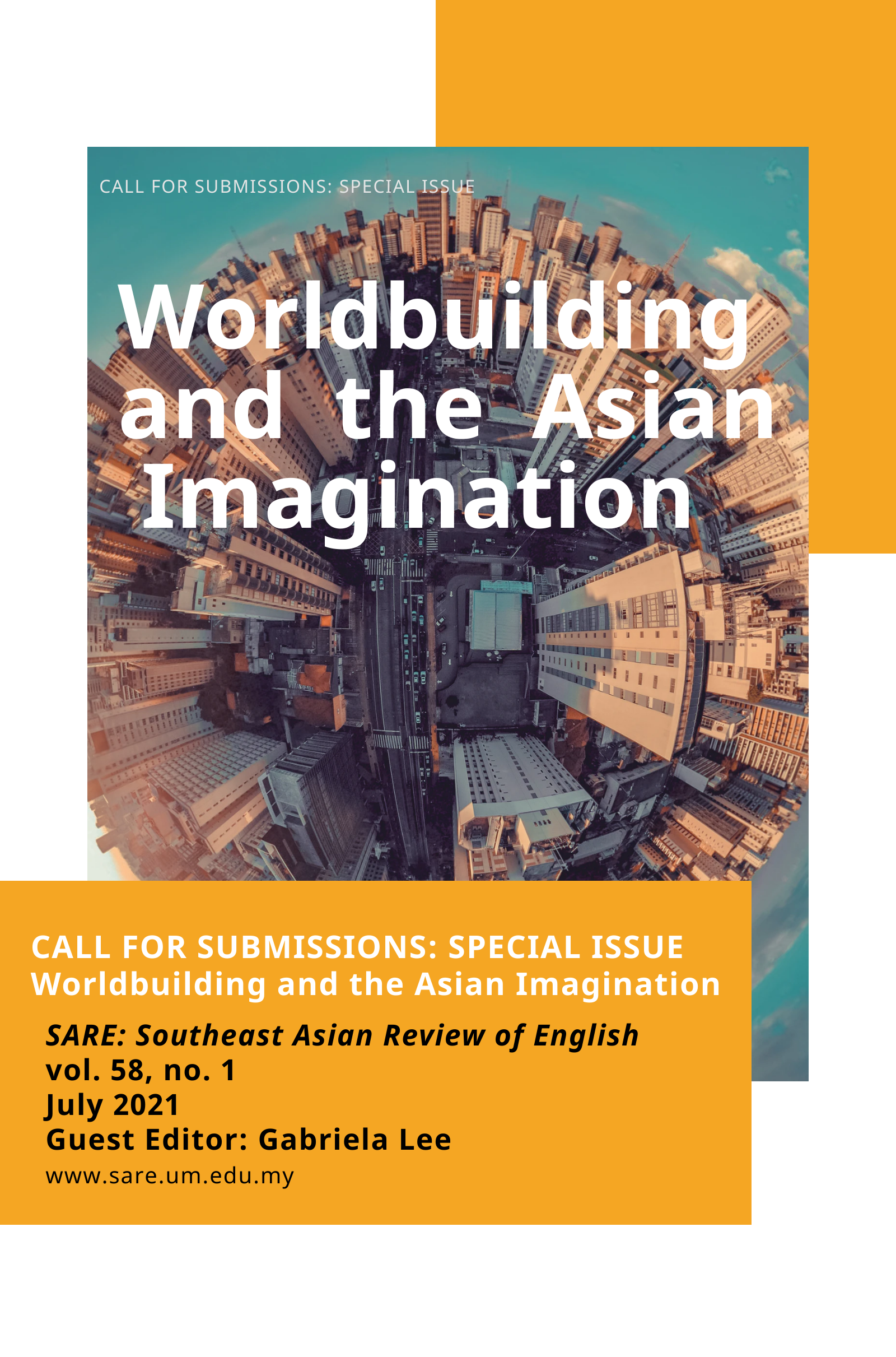 CALL FOR PAPERS: "WORLDBUILDING AND THE ASIAN IMAGINATION"

Subcreation studies is particularly interested in "worldbuilding", or the processes by which creators craft the details and events of an imaginary world that may not necessarily advance the story, but provide what Mark J.P. Wolf describes as "background richness and verisimilitude to the imaginary world" and that usually take place outside the main narrative. These acts of creation, according to psychologists John Tooby and Leda Cosmides, enable the simulation of unusual situations through association, thus allowing for experimentation as well as empathy and the development of important cognitive systems that let us participate in expansive and future-forward endeavours. These skills give us the capacity to imagine, and to even work towards, the kind of world we want to live in, and the kind of systems of living that we want to create in the real world.

However, subcreation studies also allows for a re-examination of how these imaginary worlds are created, presented, consumed, and even subsumed by corporations and institutions. For instance, it is not surprising that many of these popular imaginary worlds are coming out of significantly developed countries that have the resources to create, market, and expand on intellectual property. Given their immense cultural significance -- think of story franchises such as the Wizarding World of Harry Potter, Disney's never-ending parade of sequels/prequels/midquels, the Marvel and DC Multiverses, Star Trek, and Star Wars, among others -- there needs to be an examination and interrogation of how these imaginary worlds present and represent concepts and ideas about the world in which we live. As these worlds are representative rather than mimetic, there are myriad ways to read these imaginary worlds in terms that call to mind the struggles and hopes of our world: the violence and the victories, the despair and hopes of many, the ways in which societies struggle, perform, and aspire to surpass their own tragedies and triumphs.

This Special Issue on worldbuilding focuses on regional texts and creators, and on how Asian imaginary worlds have been conceived, crafted, and released, how they have interpreted or re-interpreted source materials, and how they have been received or engaged with by their audience. As speculative fiction writer Jeff VanderMeer points out,  "The places and spaces in which a story occurs are not inert or merely backdrops to action... worldbuilding is not just about creating colorful stages for your characters — worldbuilding can be part of what is taking place." These imaginary worlds may be in any form, medium, or genre — from Zen Cho's The Pure Moon Reflected in Water to Ken Liu's The Dandelion Dynasty series; Studio Ghibli's fascinating fantasy worlds, such as in Spirited Away or My Neighbor Totoro to the bleak horror of Train to Busan; episodic narratives such as the acclaimed historical zombie series Kingdom or the modern fantaserye world of Encantadia.

The focus of this Special Issue is the critical analyses of the production and consumption of imaginary worlds, with other elements such as plot or character being of secondary importance. It is the hope of this Special Issue that by examining the rise and structure of Asian worlds, the practice of world-building, and the audience's reception of imaginary worlds, we can reorient  the world beyond that which we experience today.

The topics that can be explored for this Special Issue include, but are not limited to, the following:

Abstracts of 200 words (maximum), along with a 50-word author bio, are to be emailed to The Editor, SARE at sarejournal@gmail.com, with a copy to the Guest Editor (gdlee@up.edu.ph), by 15 November 2020.

The deadline for the submission of full papers (6000-7000 words) is 1 March 2021.  Submissions should be in English and uploaded to the SARE website through the "Make a Submission" portal at https://sare.um.edu.my.

Some sources that can be referred to in preparation for this special issue include:

About our Guest Editor

Gabriela Lee is Assistant Professor at the Department of English and Comparative Literature, College of Arts and Letters, University of the Philippines Diliman. Her research interests include creative writing studies, children's and young adult fiction, science fiction and fantasy, and Philippine speculative fiction in English. Her fiction has been published in the Philippines and elsewhere, and in journals such as LONTAR: The Southeast Asian Journal of Speculative Fiction (Singapore), Where the Stars Rise: Asian Science Fiction and Fantasy Stories (Canada), Heat: An Anthology of Southeast Asian Urban Writing (Malaysia), Kaleidoscope: Speculative Fiction for Young Adults (Australia), and The Dragon and the Stars (United States). She has also regularly contributed to collections such as the Philippine Speculative Fiction anthologies and the Filipino Fiction for Young Adults series. Instructions on How to Disappear (2016) is her first collection of short fiction. Her second collection, A Playlist for the End of the World, will be published in 2021 by the University of the Philippines Press.

She has contributed scholarly articles to several journals such as Kritika Kultura and The Likhaan Journal, as well as a chapter on young adult speculative fiction in the Philippines in Asian Children's Literature and Film in a Global Age: Local, National, and Transnational Trajectories (Palgrave Macmillan, 2020). She is currently working on an academic sourcebook for Philippine speculative fiction, as well as on her own writing.